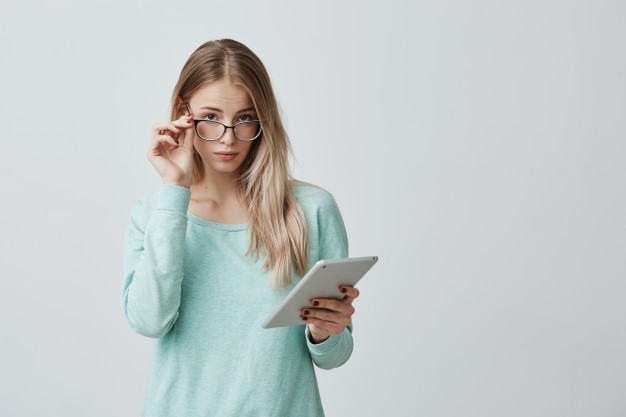 Spectacles are made of glass or hard plastic lenses, which are mounted within a frame to hold them in position in front of a person’s eyes.  It typically rests on the bridge of a person’s nose, with the arms hooking behind their ears.

Most people wear glasses at some stage, albeit for different reasons.  The development of glasses to provide or improve vision, took several centuries.  Learn more about the history of glasses here:

It is unknown who the first inventor of wearable glasses was, although the Romans were the first to discover that glass could be used to enlarge small text.  The first known wearable eyewear appeared in Italy during the 13th century, and consisted of primitive glass lenses set into frames made of leather, wood or animal horns.

They were generally worn by monks and scholars and became a symbol of intelligence and wealth throughout Europe. Traditional glass blowers produced lenses of different viscosity, based on elementary vision tests.

During the 1700s, glasses became hands-free due to their hinges extending behind the ears, and technology started to speed up.  Benjamin Franklin invented the bifocal lens, which allowed people with near and far-sighted vision problems to use only one pair of eyewear instead of two.  Scissor spectacles, which could be easily folded or stored and taken out only when needed, also gained popularity as some men didn’t want to wear glasses full time.

The industrial revolution during the 19th century led to the mass production of both lenses and frames to correct eye problems for working people.  Frames were available in different shapes, materials or colors to match people’s faces or outfits.  A good example is Theodore Roosevelt’s round spectacles without earpieces that remained in place with a nose clip.

As strong plastics started developing and replaced the old-fashioned wood or horn frames, styles kept changing.  During the 20th century, sunglasses saw the light.  Although they were already innovated in the 12th century in China, they were not used to improve vision or protect people’s eyes from the sun.  They were rather used to hide judges’ eyes in court so that no one could determine their emotions!

Certain manufacturers started to experiment with colored lenses; however, those were not meant for protection.  It was only after 1929 that tinted sunglasses were manufactured for sun protection and light sensitivity due to certain medical conditions.  Plastic lenses were introduced during the 1980s, which were thinner and lighter than glass and didn’t break as easily.

The first invented spectacles had convex lenses by chance, and could only correct presbyopia, which normally occurred in people around the age of 40, when their eye lenses started to harden.

It was much more difficult to create concave ones, as they did not naturally develop from that enlargement created by convex reading stones.  Some people attribute the invention of concave lenses to Nicholas Krebs, a Cardinal of the Roman Catholic Church, who mentioned a transparent stone containing both a concave and convex form.

Effective spectacles improved the skilled workforce, as craftspeople, such as toolmakers, weavers or metalworkers, could work more accurately with precision instruments.

Customized spectacles gained popularity after people’s fashion requirements became more personal.  They liked a specific brand, but the frames were too big or small, too round or square.  They preferred a specific color, yet the red ones kept slipping off or gripped too tight around their ears.  Custom-made glasses provide the opportunity to find the perfect eyewear.  Some people will rather wear nothing if they cannot have the eyewear they envisioned; albeit unconventional or merely intriguing.

Manufacturers offer a range of customized eyeglasses in lower Manhattan, for you to choose from.  Since opticians are in direct contact with customers, they are constantly aware of new trends and changing needs.  Several opticians worldwide have adopted the skill of 3D modelling, which means that they have the necessary software to take facial measurements and recreate them in three dimensions.

Customized spectacles or sunglasses and frames are designed with impeccable craftsmanship for each individual client.  Models are based on each client’s unique physical traits and personal styles.

People wear glasses or sunglasses for various reasons.  Although they were initially invented to assist people with eye problems, they are now also worn as non-prescription eyewear.  Around 75% of all adults need to use some sort of vision correction, with about 64% of them wearing eyewear and 11% preferring contact lenses.  Children can sometimes outgrow certain eye problems, as the shapes of their eyes change.

These are some of the medical reasons people wear glasses:

Some people wear fake glasses to make them look smarter or sexier; although it sounds silly, fashion was designed for fun, not functionality!

Click here for more information on why you might need to wear glasses.  Reasons for wearing sunglasses may include the following:

People need different prescription glasses for different activities, for example, reading glasses aren’t useful when driving.  Specialized eyewear, which can block out harmful blue light, is needed when working on computers for long hours.  Over-the-counter reading glasses won’t necessarily harm your vision, but they also won’t correct vision problems; they simply magnify whatever you are looking at.

Although it hasn’t been scientifically proven that wearing glasses too often can damage eyesight, its overall lens quality will deteriorate over time and not provide the same vision correction functions.