Home Fashion 15 Types of Smocking Sleeve Designs You Should Know

15 Types of Smocking Sleeve Designs You Should Know 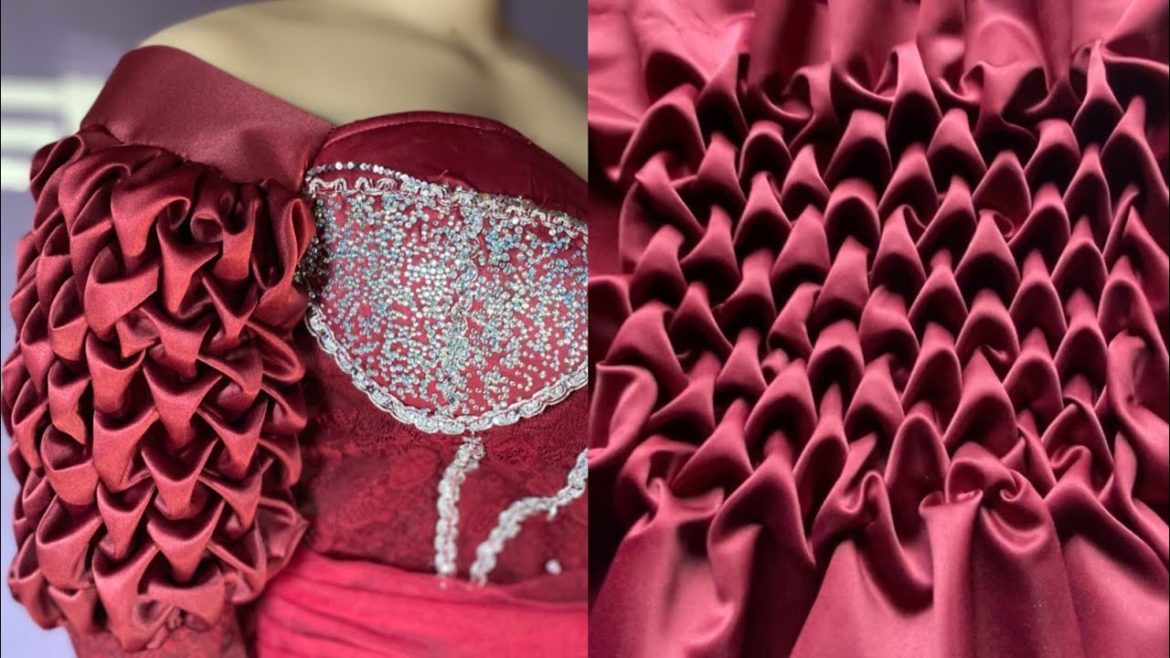 Smocking is a type of needlework that has been practiced for thousands of years. Moreover, smocking was first used on workmen’s garments to provide fullness and allow free movement of the body and arms. Of course, smocking has recently become a fashion statement. At some point in our lives, we’ve all worn dresses with elastic. People in the past utilized smocking embroidery to give their garments a flexible look.

Smocking embroidery, like other styles of thread art, uses a wide range of stitches. Each one has a distinct function.

Take a look at the 25 different types of smocking embroidery sleeve designs given below:

Let’s begin with traditional English smocking, which involves marking the cloth with dots and then gathering it into pleats using the dots as guidance on a pleated fabric. Apply stitches after the pleating the fabric, and then collecting up tiny portions of the pleats in a pattern that creates a geometric design. Before removing the gathering threads, maintain the pleats in place by embroidering on top.

Counterchange is a type of smocking made out of gingham, and then stripping, a little repeat, or handmark the cloth by the stitchery. Firstly, you’ll need to mark a lot of little dots. On a solid cloth, the dot making is how counterchange smocking is made. The gingham squares’ corners, the stripe edges, and then the repeating pattern are all picked up in a specific way with needle and thread. This might be a geometric repeating pattern or a more figurative design. Counterchange is quick, simple, and also produces excellent results right out of the box.

You can start with a piece of cloth shaped like a ring doughnut and then smocking dots in concentric rings for radial smocking. The honeycomb look is more noticeable closer to the edge since the spacing between the pleats is greater. The stitch’s elasticity allows the structure to modify as well.

Instead of gathering, use the stitch pattern to manipulate the fabric and push up in North American smocking. We started with a lattice pattern. After that, we sewed a flower pattern. These had big, repetitive fabric folds in wonderful patterns that were created by repeating the dots, but not nearly as closely. After that, sew the dots in a pattern and pulled up to create a three-dimensional design.

In this method, hold the threads and then take out and then make the pattern. Rather than creating a little stitch at each dot, the stitches in this pattern link the dots in Italian smocking. Two vertical repeats are possible, but only one horizontal iteration is possible, making the pattern difficult to discern.

Picture smocking is simply smocked cloth with pictorial stitching. Little bunnies, boats, flowers, ballerinas, and so on are all possibilities. Make Picture smocking out of anything you want. It’s also very cute to look at. Again, stitch the picture smocking onto fabric of pleats. It’s also difficult to stack cables. To make them seem properly, you’ll need to smooth them out, and there are a variety of techniques for doing so.

Cable Floweret is a form of smocking embroidery in which three rows of stitches are gathered over four columns, sometimes diagonally. Also, you can find this in a variety of western outfits. Check out below:

Honeycomb is a type of smocking embroidery in which you can make beautiful diamond-shaped patterns at the end. Also, this beautiful stitch gives a garment a sophisticated look.

The smockers’ knot is a lovely little knot made in between the smocking stitch. You can find this method mostly in decorative items. Many designers weave these knots using a different colored thread to make it easier to distinguish them from the other smocking stitches.

This form of smocking is done in a grid design. Small stitches are formed and secured in the pattern. Finish the pattern by trimming the thread.

It’s like a rope done in the same way as the stem stitch in needlework. Employ this stitch at the start of the smocking process to keep the gathers in place. Each stem stitch takes one fabric pleat and attaches it to the next.

To the left of the pleat, bring the needle up through the first pleat. Pick up the next pleat at an angle and bring it up to meet the two pleats in the middle. Keep doing what you’re doing. Keep in mind that the thread will pass between two pleats. One thing to keep in mind when doing the Outline stitch is to keep the thread in the up position after each stitch. The thread is in the down position in the stem stitch.

This is an extremely stretchy stitch that works well as the final stitch in smocking because it relieves the tension of the gathers. Go up and take up the second pleat and the following pleat after making a straight stitch between two pleats. Now move up and pick up the third and fourth pleats. Maintain the thread’s position beneath the needle.

To begin, make a mark at the top and bottom of your stitch. At all times, this stitch should be level with the marks. Make a level under cable stitch with the bottom mark as a guide. You’ve got the needle in the pleats now. Continue by bringing the second pleat up to the same level as the top gathering thread. Under the needle, the thread should be. Make a cable stitch at the top mark by bringing the thread across the needle. Return to the bottom mark and pick up the third pleat again, thread still over the needle. Stitch a bottom level cable by threading under the needle.

Smocking is a wavy patterning technique for fabrics and apparel. I hope you’ve learned something new about different types of smocking and how to do it. There are also subdivisions of these types as well, although most stitchers are aware of these terms and styles. Try all of these smocking techniques and let us know in the comment section down below which one you found easy and which one you found more beautiful to look at!